About Udawalawe National Park in brief:

Lying on the boundaries of Sabaragamuwa and Uva provinces, the park has been shelter and home to many wild animals in Sri Lanka. The Udawalawe Reservoir was constructed on the Walawe River for serving these wild animals in the Park. Before allocating the premises for Udawalawe National Park, it was used for Chena cultivations by many farmers. The park spreads over an area of 30821 hectares and is considered as one of the major National parks on the Island. This popular tourist destination is just 165 km away from the heart of the Island; Colombo. 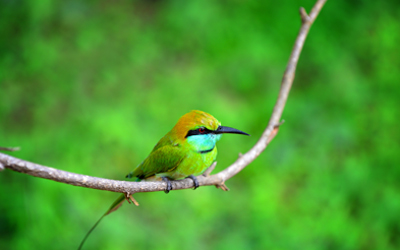 The Udawalawe National Park which is considered as the sixth largest wildlife sanctuary in Sri Lanka. With just a distance of about 165 km from Colombo, tourists can have a relaxed journey to the park and settle there early preparing for game drives. The entrance to the park lies between the two main cities of Timbolketiya and Thanamalwila. The park reportedly receives an annual rainfall of 1520mm and has a temperature that ranges between 24 to 29 degrees. The forest that has been exposed to a consistent dry monsoon has been ideal for tourists to enjoy warm and adventurous safari experience. The park which is on the central highlands, beholds captivating backdrops throughout. As mentioned earlier, the Udawalawe reservoir which was constructed in 1972 lies right at the center of the national park. The reservoir was objected in protecting the catchment area and providing water for agriculture and hydro power. While many trees catch your eye, amongst them lies the well preserved endemic plants of Teek, Mandorang and Kumbuk. They spread over the riverine areas in the park.

All tourists at Udawalawe National Park will undoubtedly be offered an incomparable safari experience. The park is beyond any expectation for most tourists. Many wildlife animals in the park are spotted and tourists can trace them in their safari jeeps with the guides. All wild creatures have their own time table and our well experienced drivers know it best when to spot who.

One of the most popular and sighted wild animal in the park would be the wild Asian elephant. Largest herds of wild Asian Elephants throughout the park can be captured closely to your naked eye. Their herds can maximize up to 100 or even larger herds are spotted. Other most popular attractions in the park include the water buffalo, gray langur, toque macaque, fox, bandicoot, sambur deer, wild boar, spotted deer, mongoose, leopard, fishing cat and jungle cat. spotting the wild leopard to your naked eye would be a bonus at the park.

The bird life at Udawalawe has never diminished over the years. Most tourists from many countries are nothing but bird lovers and enjoy spending many a time tracking bird watching trails. Capture the eye catching birds of all corners of the park for there exist your opportunity to capture breath taking bird varieties. The park lets you watch various endemic birds and plenty of migrant birds during the seasons. Some of the popular endemic birds include, raptors, Ceylon spur, jungle fowls, Ceylon green pigeon, grey hornbill, Ceylon woodshrike and Ceylon swallow. Most other bird varieties seen in the park during migrant seasons include, booted eagle, common kestrel, harries, little ringed plover, forest and yellow wagtail, whiskered tern and wood sand piper. The season for migrant birds is reported between Novembers to March every year.

Not to forget the inspiring butterfly varieties at Udawalawe could really influence on anyone to extend their stay. The magnificent butterflies are glamorous and beautiful beyond any words could explain. Most butterflies are attracted to the satin trees in the park. Some of the most common butterflies include, banded peacock, common jezebel, common Indian crow, mormon, blue bottle and various species of other colorful butterflies.

The park is also home to many reptiles out of which crocodiles, monitor lizards, snakes and various other kinds of reptiles.

The Elephant Transit Home that was constructed within in the Udawalawe National Park in 1995 is an orphanage to Elephants. There are around 40 Elephants in the orphanage and they are under the supervision of the authoritative in the Home with necessary care. They will be trained and taken care until such time that they could be released into the wild. Even after so, they would be taken care of by the authorities in the park and keep a track until they get used to the wilderness.

Your Safari Experience at Udawalawe:

As you prepare yourselves for a life changing safari experience, it is for you to know that this trip to Udawalawe will be like no other. Let this safari experience be the one that your memory lane could be proud of. Ones you reach the park, settle down in your accommodation amidst the thick forest. Not to worry about the safety for it will be taken care of.

Prepare yourselves daily for as long as your tour extends for a fresh game drive. You will be transported within the park on a comfortable Jeep where you could enjoy the journey in to the woods even more. Stop by and capture unforgettable moments as you come across any wild creatures on your way into the wilderness. Stop by and enjoy your lunch and be right back on jeep for further jeep safari adventures. How amazing would it be to capture a hungry Leopard crossing your way and walking towards its prey?

Experience a heartfelt wildlife safari at Udawalawe like never before.