Dambulla is one of the Sri Lanka’s most visited, most attractive and a popular tourist destination. This heritages and religious site enriched with beliefs in Buddhism lets tourists experience that unique feeling long before you enter the city. 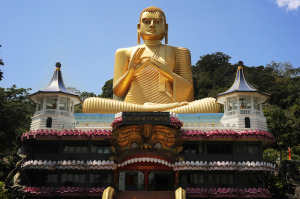 The city of Dambulla is just 148 km away from Colombo and since it resides in the center of cities, Dambulla acts as the distributor for fresh vegetables to villages. Apart from the Golden Temple some other attractions bound include the Rangiri Dambulu International Cricket Stadium, Largest Rose Quartz Mountain Range and the Ironwoods Forest. Most foreign tourists don’t miss the chance to pay a visit to Dambulla and thus ranked a top tourist destination on the Island.

Dambulla Golden Temple is the largest rock cave temple complex in Sri Lanka which has been well maintained and preserved over the years. 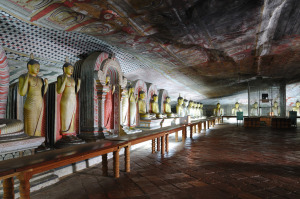 The cave temple had been constructed during the reign of King Vattagamini Abhaya who was also known as King Valagamba. During an invasion King Valagamba has made his escape to the temple and hidden in these caves. In regaining the kingdom back as a tribute for his safety, he converted those caves into magnificent temples which were placed with statues of Gods and carved and painted by experts.

The rock stands high over 160m above the surrounding plains. The cave temple complex spreads into 5 caves. Each cave is enriched with paintings and statues of Lord Buddha and Hindu Gods. In total there are 153 Buddha statues, 03 statues of early kings who ruled the kingdom and 04 of Gods and Goddesses. 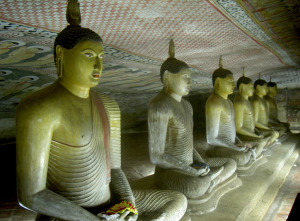 The cave temple complex is an expression of the Sri Lankan religious art crafts and paintings. The expression extends to exhibiting the masterpieces belonging to the 18th century.The five caves are as follows.

The Devarajah Lena (The cave of the Lord of Gods)

This cave temple holds possession of the large statue of 45 Feet of Lord Buddha during the final passing away. (Parinirvana statue) Later a statue of God Vishnu was constructed and attracted many believers.

The Maharajah Lena (the cave of great kings)

This cave holds possession of the wooden statues of great King Valagamba and King Nishshankamalla which are painted. The cave which is 125 ft long and 75 ft broad has nearly 60 painted images in this cave. 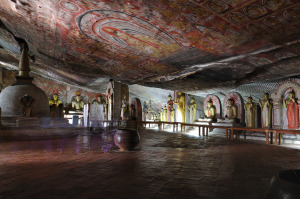 The Maha Alut Viharaya (the cave of the great new temple)

The Cave’s entrance is designed with two Dragon arches and is about 90 feet long and 80 feet broad. The 30 feet long Buddha statue is a blessing to witness. There are about 42 standing Buddha images and 15 standing images in this cave.

The Paccima Viharaya (the cave of western temple)

The cave which is a later addition is about 50 feet long and 27 feet broad and famous for its main attraction of the statue of seated Lord Buddha with a Makara Torana posture. This cave also includes a small Dagaba which holds the jewellery of Queen Somawathi who was the queen of King Valagamba.

The Devana Aluth Viharaya (the cave of second new temple)

This cave is the latest addition to the cave temple complex and is about 32 feet long. The specialty about this cave is two out of the eleven standing and seated Buddha statues are covered above with the hooded Muchalinda cobra.

As you enter the caves feel the miraculous constructions capturing the momentous visit to the cave temples. 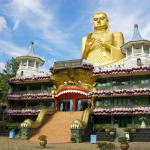 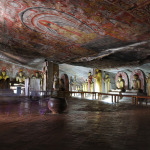 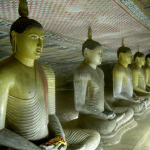 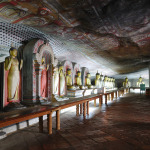 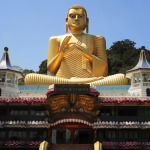